Founded more than 40 years ago, Atlanta-based Niles Bolton Associates (NBA) has designed projects in 49 states. In 2012, the company worked closely with community leaders in the Old Town neighborhood of College Park, Maryland, to develop a plan and style for a privately owned, purpose-built student housing building. Once finished, the building needed to be welcoming to University of Maryland students while fitting in with the context of other buildings in the vicinity. Located just one block from campus, Landmark College Park is a nearly 347 000 sq. ft. mixed-use complex with 276 apartment-style units and 16 000 square feet of retail space, including the first Target Express store along the East Coast.

CBG Building Company completed construction of the project in May 2015. "This design was one of the area's first five-story Type IIIA wood structures built over a two-story Type IA concrete podium for the parking structure," says NBA principal Steve Gresham. "We really liked the fact that the UL wall assemblies using LP FlameBlock Fire-Rated Sheathing had already been thoroughly tested. The code officials were familiar with four stories of residential construction over a concrete podium, but they weren't used to seeing five stories. So, the UL documentation that LP provided helped them quickly understand and approve what we had designed." 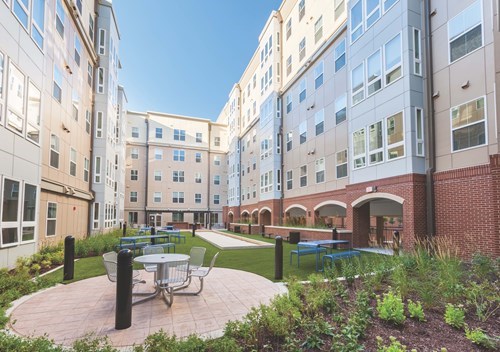 "For the Landmark project, we had initially specified the U301 wall assembly," says Kevin Cabitt, NBA's project architect for the build. "Substituting in the W408 wall assembly with LP FlameBlock sheathing reduced construction time because it eliminated the need for an additional layer of exterior gypsum. Having an assembly that was approved through UL gave the building officials the confidence that the assembly was safe." The W408 assembly gives architects greater design flexibility because it helps reduce the wall thickness compared to common alternatives. The LP FlameBlock panels have an Exposure 1 rating, which means that they can withstand normal exposure to moisture during construction. They also provide an excellent substrate for securely fastening exterior facing cladding.

"Overall, the W408 wall assembly was much easier to build when compared to the U301," says Gresham. "The W408 assembly has fewer parts, so the installers can do a better job. It was also easier for us to determine that the fire-resistant portion was in place because of LP FlameBlock sheathing's distinctive white color." CBG contractors didn't attempt to swap out any of the materials specified for the wall assemblies at Landmark. "One of the reasons we like working with CBG is that they recognize that it's difficult to change anything that has to do with the fire safety of the building," says Gresham. "We didn't have to convince them that the LP solution was the way to go." 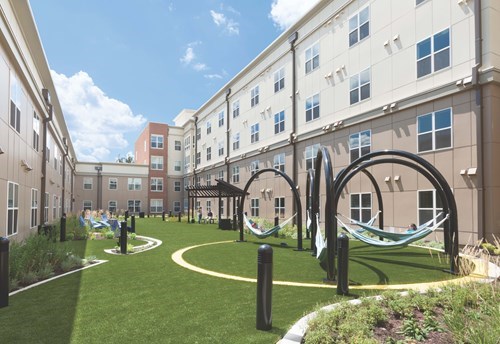