Building professionals who work on townhomes are likely familiar with area separation walls that use shaft wall liner, often referred to as shaft walls. Though commonly specified, assemblies using shaft wall liner come with an assortment of building challenges and complexities. 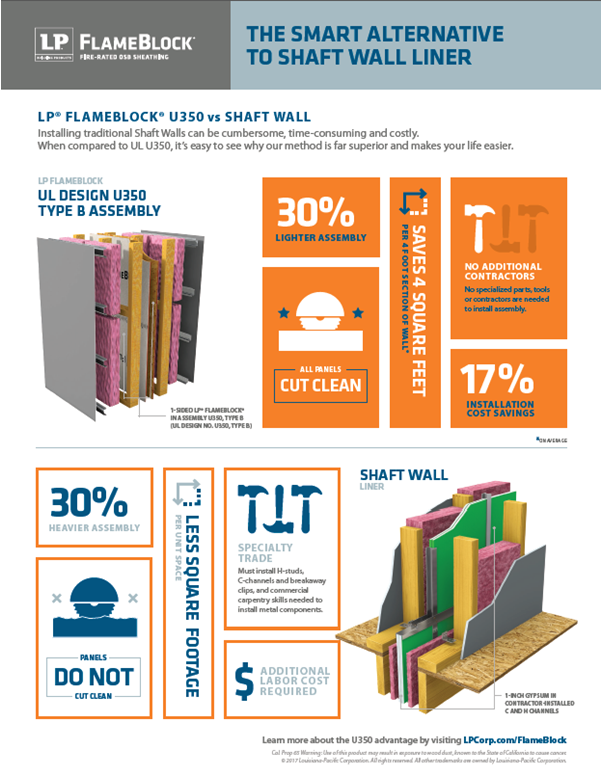 "Our volunteers range from people who have never touched a hammer to semi-professional framers," said Allen. "The typical party wall uses a heavier material. Because we are using volunteers, the party walls were becoming especially cumbersome and posing safety issues." Because the LP FlameBlock UL U350 assembly eliminates the heavy, one-inch-thick gypsum and associated hardware that is typically required in an assembly using a shaft wall liner, the volunteers were able to build the assemblies much faster.

In Burleson, Texas real estate and development company, Bransom Homes used the UL U350 assembly on 16 townhomes for the Heritage Village project. After hearing about the performance and structural benefits of LP FlameBlock sheathing with the UL U350 assembly, Superintendent Jake McWhirter and his team decided to make the switch.

According to McWhirter, the job went smoother and faster with the use of LP FlameBlock sheathing. "The FlameBlock goes in just as fast as sheet rock. The fact that it can also be used in the roof deck makes the job so much easier."

When to Choose LP WeatherLogic Vs. LP TechShield for Roof Sheathing

When beginning new construction, many builders often start with the mindset of using traditional or commodity OSB materials. However, when homebuyers demand certain elements to be built into their home-including sustainability, energy efficiency, resiliency and overall performance-builders often shift to designing with premium building materials.

Siding is often a top contender for homeowners looking for ways to refresh their brick exterior or expand their home-and they are looking to builders like you for guidance on how to best pair the two materials. Let's take a look at some popular ways to use engineered wood siding with brick and the best practices for installation of LP® SmartSide® Trim & Siding with brick.

In the construction process, there are many factors to consider. Among these factors is whether to use one-sided LP® FlameBlock® Fire-Rated Sheathing or two-sided LP FlameBlock sheathing. To help explain the reasons one assembly is used over another, we caught up with Scott Johnson, Manager, Construction Services at LP Building Solutions.

At LP, we value partnering with you to build your business. We seek to provide not only one of the most durable siding materials available, LP® SmartSide® Trim & Siding, but also the support you need to operate a thriving business with our product. That's why we're excited to announce that the LP® BuildSmart™ Preferred Contractor Program is now LP® Remodelers Edge.